“How good’s this stuff, anyways?” the AM/PM guy asks as he examines the cold-brew I’m purchasing. He has a floppy way of talking, which I like. I confess ‘I dunno’, but coffee seems a good choice.

“I’ll let you know, Friend,” as I glance out the window. “Doesn’t look like I’m going anywhere soon.” The brake lights are red on three sides of the building; there are three freeway exchanges that all look like bad choices.

“Shit—you’ll be sitting here fuh an hour at least. It’s a muthafucking parking lot out there.”

So I sit on the stucco wall outside the AM/PM, kicking my legs. Orion is to the southeast; I remember when it was brighter. I don’t see well at night and it’s easier to let the brake lights lessen in their glaring volume rather than attempt the freeway home. I have better patience these days, so sitting on a stucco wall in a gas station is no big deal really, and there’s another gentleman waiting out the traffic, too, hands crossed behind his back and muttering in a black coat. I’m nonplussed; I just sat through six hours of orientation at the Del Mar Whole Foods, and the AC there was broken. The Del Mar Whole Foods is located just north of San Diego’s worst traffic convergence as well, so frustration was in the cards and—not being a gambler—I folded my hand early, not wanting surprise at a loss.

I had some tempura in the store before leaving, wandered a bit and keep reciting Ginsy’s ‘Supermarket in California’ in my head while watching patrons hover over the produce. ‘Where are you tonight, Walt Whitman?’ ‘Was that Garcia Lorca by the melons?’ These are happy thoughts to me; I buy a grip of cheese and some olives.

“Sir: do you know that blueberries and honey go well with purple asparagus?”

“You’ll want to soak that pork loin in plain milk. That’s what the Romans did.”

These are my thoughts, the stupid knowledge that takes up coils of my brain, that insists on being primary in my head while instead I should be better fiduciary, or at least be able to balance a checkbook without aid of a trapezist pole. But—no—it’s all peaches and penumbras, wives in the avocados, babies in the tomatoes.

I endure the brake lights, many many minutes of ‘stop and go’, so many that I arrive home at bedtime. Having been trapped in a car, I take a walk while everyone else retires to their sheets; take an unexpected left through busy crosswalks and wander into an establishment where music is playing loud and unheard.

The singer plays a guitarrón; his supporting players pass a tallboy back and forth as well a melodica that’s been done up in Oaxacan paint. One guy plays the percussion box, and they jam out some Mexi-reggae. The restaurant’s empty, save for me and a bowl of chips, and this is like something that’s been granted me alone, the guitarist noodling a nylon-string solo while the percussion rises in intensity, the sound filling the hall as the barback clears a woefully small number of spent glasses. Really, it is all for me, and this feels like special reward for things having been endured: the glaring streams of brake lights, the meanwhile deadening Orion; these past six months and having been fired at forty, the HR door clicking shut like a well-hewn guillotine blade on a twenty-year career. All these things, but the guillotine blade missing its mark, the Angle of Louis, which is the scientifically determined line where the blade is meant to pass easiest through the neck. 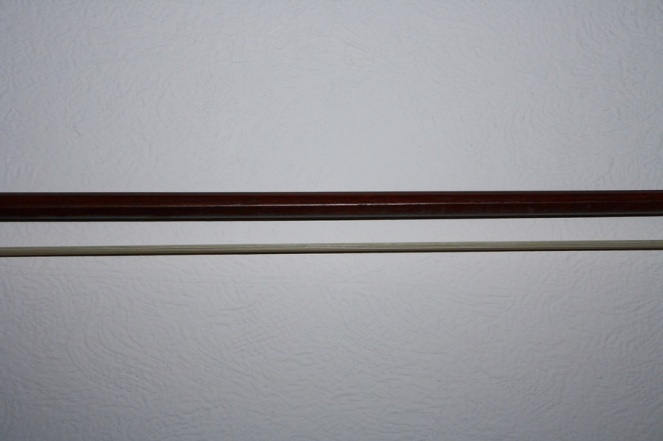 The violinist pauses with the rosin, and asks: “Are you sure?”

“When thou art near, I go with joy
To death and to my rest.”

She wears plumbago on her wedding day, a gauzy dress that she’s had the Maid of Honor secure shy of her left breast; there are spangles that decorate the gown, upward of her navel and in a line down her right thigh.

“It’s our song. He just doesn’t know the second line.”

The violinist raises an eyebrow. “Bist du bei mir. It is pretty.”

She puts away the rosin bag into a narrow case, a recessed compartment, and rests her bow onto her shoulder.

Misha later draws water in the kitchen, for tea; she’s a surgeon and that she had wine on the day he tried to un-surger his own wrists, was granted three-months leave. She makes tea, has taken up cigarettes.

He emerges from the back room and there’s no spotting on the gauze he wears now as decoration, wrists healed, and because she’s crying he wraps his arms around her. Bach is playing in the kitchen and, because she’s crying, Misha is given a longer hug than usual. He begins explaining the song structure to her, though he still doesn’t know the second line.

“He wouldn’t otherwise hug me, but I was given pass. I was sobbing,” Misha explains. She’d rather not tears for him, but they happen.

Like when he frustratedly unwrapped her on their wedding night, where she felt she could be a treasure unlocked, but where he found pins and hindrance instead, the stars she had placed as if you could choose constellations, where above her sex he ignored the careful and particular twist of her dress that was meant to be revealing when unraveled, these details of intimacy ignored; he fell asleep and she cried.

“O how joyous would my end be.”

And Misha presses her face to his collar.

“The continuo part is agitated in this version. You OK, Love?”

Twice he moves to release their embrace.

“If your fair hands
Would close my faithful eyes.”

“It’s ok, Babe,” she says. And she wished he would remove the wristbands as they scratch the back of her neck.

The violinist exhales, not exactly ready. She then chords the throat of her instrument as Misha stands at the runway, wiggling in uncomfortable shoes. She raises the bow, shuts her eyes, and begins playing.

I fell asleep on the roof last night. And some people count sheep, but I was thinking of Chagall; I saw goat-things pass the moon and I climbed the side of the house so that I could better see the illumined clouds. I was on the roof, and I tucked myself in next to the attic—I do this, often—and the moon was something within reach, the ground unreachable, and I fell asleep with the moon on my chest. I looked at the sky all dotted with things and smiled, smiled; these things that generally rest on closed eyes, just some eyes not.