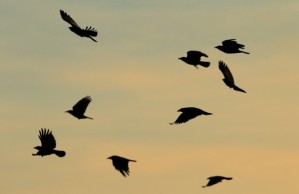 Sitting in the canyon watching the crows find the bare branches to perch, And it reminds me everyday of the crow that found sill on my younger son’s birthday, it leaving a feather outside the window while we received his diagnosis.

There’s the theory of the crows, and that they’re harbingers of something, collectively called a murder. Black, and it’s how I felt on Finn’s birthday, as if I offered up bad seed, as if I did something wrong.

There’s free-floating guilt, and I have a lot. Continuous performance, a continuous fight against genetic inheritance. My mind is both vacuous and busy at once and if I could edit the sad parts.

Finn was born six years ago. On the radio, on NPR, they were reporting about genetic testing, the new eugenics, and I punched the ‘off’ button. Truth is, as hard as the crow tried to deliver an omen, I birthed a unicorn.

This lady comes into my aisle—Jane—and she has with her a boy with Trisomy 21.

“I have an angel, too,” I say, and I’ve forgotten I’ve already told her so.

Jane’s son reminds me of Finn because, opposite his diagnosis, he’s long and lean. He’s tall for his age, yet wears spectacles. I’ve not seen him smile yet, which I’m sure he does, but he follows his mother like a rooster child. He’s beautiful and we shake hands.

I cherish beauty, more than anything else. I want to die of Stendahl’s Syndrome. My son—he provides. He wanders into our bed most nights come 2 a.m. and sleeps next to Momma. Almond eyes closed shut and thin flaxen hair. Blond eyelashes and long froggish legs always kicking against nothing in particular. Like I tell Jane: ‘he is my angel.’ Just no wings, curiously pumping feet, and a thumb resolutely stuck in mouth.

“I love you, Finn,” I say all the time. I watch the crows that don’t affect me anymore save for their raucous cries and curious behavior. I watch tem and don’t mind if they leave me a black feather. They are harbingers of nothing, just curious like my boy. I want them in my life, spread-winged and beautiful. Black angels in the eucalyptus trees.

Black angels, bad seeds: all of this my projection on things wherein life is otherwise perfect. Finn has taught me a lot. Six years old and magisterial.

Today, I left my usual perch in the canyon, where I watch the crows (who have successfully fended off the hawks) to explore further into the gulley. I walked past the bungalow hidden in a copse of trees to find a series of makeshift benches and ramshackle drawbridges, more quizzical houses deep set in the ravine, and a series of stone and wood sculptures, proof that I’m not the only one that walks this walk.

Cayden graduated elementary school this morning, and it was like discovering a flagstone staircase, else a burgeoning flower on a warp of cactus. New, but not unseen before. New to me.

I couldn’t be a prouder dad. Gold merit awards, certificates of bilinguality. Cayde with his chosen bow tie and beaming smile. My furiously independent kid with his fading fuschia hair and curious questions, off to middle school where he wants to learn a third language and continue his math. My kid, MY kid, beautiful and rambunctious, explored and unexplored at once, like the gulley that opens up into a bigger canyon, a dry river bed that shows also proof of water.