Cayden suggests an experiment. He has two vials of water, one smaller than the other. They are capped neatly.

“I’m gonna put these in the freezer. Which one will freeze first, Daddy?” I give him the correct answer. I say something about volume. Thirty minutes and one game of Battleship later, I’m right.

On to the next experiment.

“But which one will THAW faster, Daddy?” and Cayden runs out the door to place same-said vials in the sun, on the outdoors and lattice-work table, which, by virtue of the drought more than anything else, has resisted rust.

It’s sunny out, so remains my disposition. Cayden sets the kitchen timer. We put Battleship away and wait.

I woke up earlier in the morning with Finn singing. He does this. He doesn’t have words yet–his Down Syndrome having him still pre-speech–but he matches syllables to his own manner of sounds. If I say: ‘Findlay Cooper’ in my made-up brogue, he’ll repeat, ‘Dum-dee-da-da.’ It’s a comfortable echolalia and something nice to hear, even better to wake up to. Finn sings and he talks. In a room of excited peoples, he’ll gesticulate like mad mimicking all the things we do when talking to each other.

One time I told him I didn’t want him.

I don’t like to admit it, but it’s true. There is anger and there is grief, also words accidentally freed from icebergs.

In Cayden’s room we play guitar. The vials are out in the sun and Cayde is explaining magnets to me. I’m cross-legged on the floor with my friend’s Mitchell. Finn, meanwhile, has planted his hand firmly on the fretboard so my C#m is muted. I’m playing the song ‘Where is My Mind?’, which is appropriate because I’m due for both the doctor and a refill. Cayde momentarily pays attention to the music lesson, so we take a minute to figure out the lead guitar bit on the Playskool xylophone.

“Cayde: just do blue to green for four counts, then four on orange to yellow. Dude—it’s an easy part. Think The Ramones.”

Cayden knows The Ramones. He gets it finally, and he taps a yellow mallet on blue and green in time with my strumming. Finn decides to let go of the Mitchell’s neck and air-guitars his own song while bouncing at the knees. He turns in a circle and sings exactly eight syllables.

Meanwhile, I’ve forgotten how to play guitar. Passing in between songs, some that I’ve written and most I have not (and all the while Finn dancing) I land on a forgotten chord: the D minor. Three fingers in the same array as if you were pitching a curve ball. I think so, at least. I’ve forgotten how to pitch, too, with my beard now graying, and it having been a long time since Little League. Currently it’s Cayde who fits my old baseball tees.

Cayde breaks up the party because the kitchen timer is going off. He darts away, then returns with his experiment in hand.

“Look, Daddy—they both thawed out.”

I’m holding Finn today in the kitchen, his ginger hair and blue eyes peeking out from beneath an orange-banded crocheted hoodie. He is typically wide-eyed and drop-lipped, a look of either perpetual amazement or bewilderment. At the moment it’s bewilderment, I think. His reach is halfway there, and he has discovered Daddy’s beard.

When Findlay encounters something new, he claps his fingers in excitement and, always–like some cosmic Zen joke–it’s 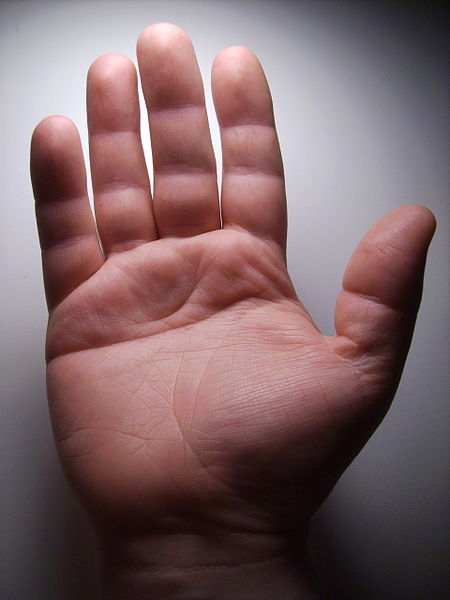 My palm has three creases, Finn’s has one: a trisomy-21 single traverse palmar crease. Part of his diagnosis.

Finn claps his one hand and smiles. Instantly his face transforms, his eyes become little parabolic slits, his smile that of the muse Thalia, except with a slightly protrusive tongue. There’s no Melponome counterpart, Thalia’s frowning other half. Finn’s rarely upset. No one has asked him: ‘Why the long face?’

He’s an unwaveringly happy kid and I have absolutely no idea what that must be like.

I set Finn’s carrier down on the ground today beneath a curbside banner while I fumbled with car keys and grocery bags. A lady actually ran out of a storefront and exclaimed: ‘Oh my God! I’ve never seen anything like that! Look at how he looks at that flag!” And Finn was hugely intent, wide constellated eyes taking in the furling fabric. “He likes trees, too,” I say, “Movement.” I’m not sure what else to say. I put away the groceries. Beer and salsa.

I hold Finn. He gnaws on my shoulder, and there are those ever-present blue eyes. His body is limp save for his trembling reach, this time for my glasses. He is hypotonic: part of the diagnosis. Cayde destroyed my glasses when he was eight months. Finn is polite–he bats at them.

Last week, I took Finn to the physical therapist. She had a hawkish nose and wore some essential oil or other. Finn was floppy. He wore his Thalia smile and curled armadillo when the PT tried to sit him up. We were on a cushioned mat in front of mirrors. Finn laughed every time he caved into a somersault.

“Well, he’s not near crawling.”

I’m staring at myself in the mirror, just above my son’s reflection. I consider: I look haggard. Were it not for the hat and scarf, I’d present as unkempt. Not the insouciance I was going for. My hair is greying.

“You know he may not walk until he is two, perhaps four.”

“I know.” I need a haircut. Crows have made tracks beneath my eyes.

“You know you can’t compare him to your first-born. Fin’ll get there. But in his own time.”

We always worry about our babies growing up too fast, don’t we?

Finn and I sit on the porch and remark the plants. I out-loud blame him for my grey hairs. He babbles.

And his one hand claps.